Art of Makeup Diary Of a Makeup Artist

The Art of Makeup School covers the essentials of in-depth character and special effects makeup transformations in just seven weeks. Our seven-week program offers the opportunity to learn from an array of industry-leading guest instructors, to take your education to the next level.

Without further ado, we’re pleased to announce our guest instructors for the highly anticipated

Traveling to Portland from Hollywood, CA, we look forward to the return of internationally known

Rachael discovered her natural skill and passion for prosthetic makeup when she attended and trained at New York’s Makeup Designory. She has worked with diverse clientele including Fall Out Boy, Hyundai, National Geographic, SyFy, Nerdist Industries, MGMT, The Metropolitan Opera, Girl Scouts of America, Disney, Target, and Universal Studios, and was a finalist in multiple IMATS Battle of the Brushes SFX competitions. She competed in SYFY’s Face Off Season 7: Life and Death, and after becoming a fan favorite, she got invited back to compete for a second time on Season 11, All Stars. As Project Supervisor of Global Effects Inc., she had the pleasure of working with ANOVOS and their Star Wars License, Agents of SHIELD, Spielberg’s Bridge of Spies, Castle, Doctor Who, Orbital Outfitters, and Solar City, to name a few. She also enjoyed a tenure at Xiao Jin FX, located in Beijing, China, where she taught FX, Sculpting, and Shop Class for four months. Rachael also created creature suits and fake body parts for the movie Annabelle. Needless to say, Rachael is insanely talented, and we couldn’t be more grateful for her willingness to pass on her knowledge to our students.

Next, students taking this upcoming program will have the rare opportunity to be taught Aging Makeup in our Character Aging Makeup class by two-time Emmy Award winning makeup artist, and the creator of both Make-Up Artist Magazine and IMATS  (International Make-up Artist Trade Show), Michael Key.

Michael has worked as a make-up artist for multiple award-winning film productions, such as How the Grinch Stole Christmas, Planet of the Apes, and Star Trek Generations. With 4 Emmy nominations and 2 wins for Star Trek: Deep Space Nine (1993 & 1995), Michael pushes the industry standard while unveiling the secrets to the mystery of makeup transformation. In 1996, Michael published the first film industry professional make-up artist magazine, simply named Make-Up Artist Magazine. Over the last 23 years, thousands of the top artists in the industry working on the latest and biggest block buster films have been interviewed for the magazine, showcasing their work and explaining their process. As if this extraordinary accomplishment wasn’t enough, the following year Michael started the first ever makeup artist trade show which quickly became an international success and the largest celebration of makeup artists in the world. Each year, thousands of aspiring and successful makeup artists gather across the globe at each IMATS where the best of the best lecture and demonstrate their passion for their art. Michael is a truly inspiring human being and we can’t express how lucky we are to have him!

Next up, we’re excited to welcome back Diane Trapp, who has been doing hair and makeup for professional theatre productions since 1972.

Diane is a proud member of the IATSE local 28, and for 19 years has been part of their Wardrobe, Hair and Makeup Department. She has worked for several theatre companies as the Makeup and Hair Designer, including Musical Theater Co., Eugene Opera, New Rose Theatre, Oregon Ballet Theatre, and Columbia Dance (to name a few). Currently, Diane’s main focus is in education, with over 30 years experience as Portland Community College’s Stage Makeup Instructor for their theatre arts program. She designed many shows for the college, including Amadeus, Little Shop of Horrors, Hairspray, and Usagi Yojimbo. Diane also works on touring Broadway shows that come into town, most recently Aladdin at the Keller Auditorium. 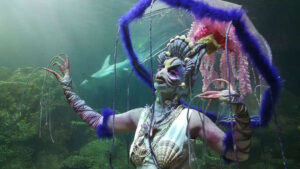 We currently have ONE spot left for our upcoming program starting October 25th! Let us know ASAP if you want to grab it: info@artofmakeup.com or apply here

Read more about the program at www.artofmakeup.com/fx